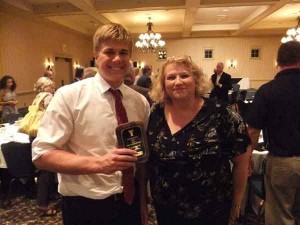 On Tuesday, May 10, 2011, Coldwell Banker Innovations was represented as a corporate sponsor at the 2011 True Grit Awards ceremony at Fountain Head Country Club in Hagerstown. CBI provided financial support for a scholarship awarded to a student athlete from Heritage Academy.

The True Grit Award is presented to a senior student athlete from each high school located in Washington County – both public and private, as well as a second-year student at Hagerstown Community College, who has demonstrated the ability to overcome hardship to become or remain a member of an athletic team. These students, who usually are not the stars of their teams, most often have been the ones who have “helped the stars to shine.” The selection of each award recipient solely is the decision of each school.

Troy suffers from a condition known as “Ehler’s-Danlos” syndrome. This affects his connective tissue and results in severe headaches and neck problems, often requiring stabilizing the spine and head. After playing basketball as a freshman, Troy was unable to play his next two years but was determined to play his senior year. Troy not only played but excelled, helping lead his team to a 17–6 season. He was a force inside offensively and was one of the leading rebounders in Washington County. He was voted to the first team for the Mason Dixon Christian Conference. While the team had to alter certain routines because of his condition, he was a pleasant addition to the squad. Beyond his basketball contributions, Troy is an individual of high character, who is very willing to serve and help others.

Each True Grit Award recipient receives a $500 post-secondary scholarship, a plaque to commemorate this recognition, a photograph with the corporate sponsor, and a one-year membership to the Hagerstown YMCA.

This 2011 True Grit Awards program continues the program that existed from 1975-1999 and which was re-started in 2003. It is sponsored jointly by the Hagerstown YMCA, the Herald-Mail Newspapers, the Washington County Convention and Visitors’ Bureau, and the Washington County Public Schools.

Congratulations to Troy and the rest of the True Grit Award recipients and thank you to all of the donors and corporate sponsors who made these scholarships possible!